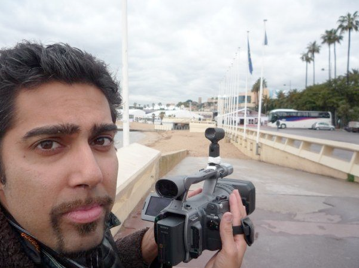 Director Jason DaSilva has been a prolific filmmaker for the past 10 years. He has directed four short films (OLIVIA’S PUZZLE, A SONG FOR DANIEL, TWINS OF MANKALA, and FIRST STEPS) and two feature-length documentary films (LEST WE FORGET and WHEN I WALK). Many of his films have won awards; OLIVIA’S PUZZLE premiered at the 2003 Sundance Festival and qualified for an Academy Award. Three of his films have had national broadcasts on PBS, HBO, and CBC. He also produced Shocking and Awful, a film installation on the anti-Iraq war movement, exhibited at the 2006 Whitney Biennial. Each one of these works advanced Jason’s objective to give voice to those on the periphery of society. In 2006 Jason took a short break from filmmaking to earn his MFA in Applied Media Arts from Emily Carr University.

He recently produced and directed an Op-Doc (opinion documentary) for the New York Times called ‘The Long Wait,’ published in January 2013. DaSilva’s latest film, WHEN I WALK, was an Official Selection of the 2013 Sundance Film Festival and won Best Canadian Feature at HotDocs 2013. Following the film’s theatrical release this fall, it will air on POV on PBS in 2014. He currently lives and works in Brooklyn, New York.

Alice Cook is a documentary filmmaker and producer living in Brooklyn. WHEN I WALK is her first production that she wrote, edited, and produced. She also produced and directed the New York Times Op-Doc (opinion documentary) ‘The Long Wait,’ published in January 2013. She also produced the digital media project, AXS Map, that was funded by Google Charitable Giving and other foundations. Alice is passionate about methodologies for social change through communications and media. She has a BS and MS in Engineering Science from Stanford University.

Yael Melamede is a co-founder of SALTY Features—an independent production company based in New York City whose goal is to create media that is vital and enhances the world. Melamede’s producer credits include DESERT RUNNERS, directed by Jennifer Steinman and premiering June 2013 at the Edinburgh International Film Festival; the 2013 Academy Award®-winning documentary film INOCENTE, directed by Sean Fine and Andrea Nix Fine; BRIEF INTERVIEWS WITH HIDEOUS MEN, directed by John Krasinski, based on the book by David Foster Wallace; THE INNER LIFE OF MARTIN FROST, written and directed by Paul Auster; and MY ARCHITECT, directed by Nathaniel Kahn and nominated for an Academy Award® in 2004. Upcoming films include MARTYRS’ CROSSING, based on the bestselling American novel by Amy Wilentz; and SLIPPERY SLOPES, based on the work of bestselling author and acclaimed behavioral economist Dan Ariely. Melamede trained as an architect before becoming a filmmaker.

Lydia Dean Pilcher is founder of Cine Mosaic, a production company committed to producing independent feature films, with an energetic focus on developing entertaining stories that promote social and cultural diversity. Pilcher has produced over 30 feature films, most recently THE RELUCTANT FUNDAMENTALIST, based on the highly acclaimed novel by Mohsin Hamid, directed by Mira Nair and starring Riz Ahmed, Kate Hudson, Kiefer Sutherland, and Liev Schreiber; and CUTIE & THE BOXER, directed by Zachary Heinzerling, who won the 2013 Sundance Best Directing Award; and the recent Cannes award-winning film by Ritesh Batra, THE LUNCHBOX. In post-production is THE SISTERHOOD OF THE NIGHT based on the story by Pulitzer Prize-winning author Steven Millhauser. Headed for production this year is FELA: MUSIC IS THE WEAPON for Focus Features, and THE BELLY OF THE BEAST for HBO Films with director Oren Moverman. Pilcher has been nominated for five Emmy and Golden Globe Awards for HBO Films productions including YOU DON’T KNOW JACK, directed by Barry Levinson and starring Al Pacino. Prior to that, Pilcher’s manyproducer credits include AMELIA, starring Hilary Swank as the famous aviatrix, Amelia Earhart; THE DARJEELING LIMITED, directed by Wes Anderson; and THE NAMESAKE, based on the novel by Jhumpa Lahiri and directed by Mira Nair. Pilcher is a Board member of the Producers Guild of America.

Tom Paul is a re-recording mixer and sound designer working in New York City. Paul got his professional start as a boom operator in 1988, moving on to production mixing in 1991. Some notable titles of his early years in production sound include: TRUST, THE WEDDING BANUQET, EAT DRINK MAN WOMAN, LITTLE ODESSA, SWOON, and THE YARDS. Some highlights of his sound design and re-recording credits include the Academy Award®-winning films THE FOG OF WAR and BORN INTO BROTHELS. Other notable films include JUNEBUG, PALINDROMES, THE BAXTER, THE KING, and U2 360, the largest selling concert DVD of all time. Most recently, Paul sound-designed, mixed, and scored the Bulgarian film AVÉ, selected for competition in Critic’s Week at Cannes 2011, for which he composed and performed original piano music for the film. Paul is currently working with editor Walter Murch on a new film, PARTICLE FEVER.

Emmy-winning composer Jeff Beal’s compositions can be heard in movie theaters, concert halls, CD recordings and on television. As a film composer, Beal scored Ed Harris’ critically acclaimed directorial debut, POLLOCK, and, most recently, BLACKFISH (Magnolia Pictures 2013). Other scores include director Bob Rafelson’s NO GOOD DEED, William H. Macy’s DOOR TO DOOR, THE PASSION OF AYN RAND, “From the Earth to the Moon” (Episode 9), USA’s “Monk,” Tibet: Cry Of The Snow Lion, Jessica Yu’s IN THE REALMS OF THE UNREAL, and, most recently, Netflix’s original series “House of Cards.” Beal received an Emmy for his score to the NBC Sports documentary, PEGGY AND DOROTHY. Beal’s seventh solo album, Alternate Route (Unitone Recordings), features his trumpet concerto, as well as original works for trumpet and the Metropole Orchestra of the Netherlands, a group with which Beal frequently writes and performs. His other jazz albums include Three Graces, Contemplations (Triloka) and Red Shift (Koch Jazz). A graduate of the Eastman School of Music, Beal received his first national attention while in college as the recipient of an unprecedented 11 “db” awards from Downbeat Magazine for his recordings as a jazz trumpeter, composer, and arranger. Beal resides in southern California with his wife, soprano Joan Beal, and their son, Henry.
Facebook Twitter Youtube